Electrum-LTC is a simple, but powerful Litecoin wallet. A twelve-word security passphrase (or "seed") leaves intruders stranded and your peace of mind intact. Keep it on paper, or in your head... and never worry about losing your litecoins to theft or hardware failure. No waiting, no lengthy blockchain downloads and no syncing to the network.

Electrum-LTC is a community-maintained port of Electrum, the Bitcoin wallet, to Litecoin. It is not an official product of Electrum Technologies GmbH, which does not support it.

Versions of Electrum and Electrum-LTC older than 3.3.3 are vulnerable to a phishing attack, where malicious servers are able to display a message asking users to download a fake version of Electrum. To prevent user exposure, versions older than 3.3 can no longer connect to public servers, and must be upgraded. Do not download software updates from sources other than electrum.org and electrumltc.org.

Always verify the digital signatures of the files you download! (example procedures)

Make sure you back up your wallet/seed if upgrading from an earlier version.

Is there a version of Electrum-LTC for Android?
Android is not currently supported. If you are looking for a mobile wallet, check out LoafWallet, Jaxx or Coinomi.
Does Electrum-LTC support Segwit?
Support for native Segwit transactions is in the works. However, this is not needed for normal operation, even now that the Segwit soft fork has activated.
What is the Seed?
Electrum-LTC uses a 128-bit random seed to generate your private keys. The seed can be represented as a 12-word mnemonic code. You do not need to perform regular backups, because your wallet can be recovered from the seed that you can memorize or write on paper. 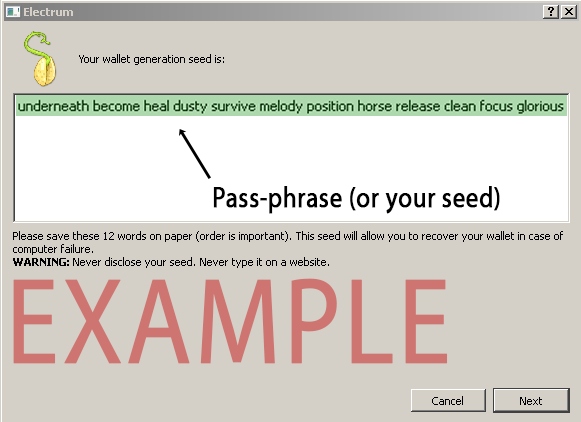 What is the gap limit?
The gap limit is the maximum number of consecutive unused addresses in your deterministic sequence of addresses. Electrum-LTC uses a gap limit to stop looking for addresses. This is set to 5 by default, so the client generates new addresses until 5 unused addresses are found.
What does it mean to "freeze" an address? When you freeze an address, the funds in that address will not be used for sending litecoins. You cannot send litecoins if you don't have enough funds in non-frozen addresses.
What should I do with my old Litecoin addresses and wallet when switching to Electrum-LTC?
The best way to switch to Electrum is to send all the litecoins you have on your old wallet to one of the addresses on your Electrum wallet. This way you'll have all your litecoins secured with your seed. Older versions of Electrum could import private keys from another client, but then you had to backup those keys separately, as they could not be restored by the Electrum seed.
Where is my wallet file located? A default wallet file called default_wallet is created under the /wallets folder when you first run the application. On Windows, this folder is located in \Users\YourUserName\AppData\Roaming\Local\Electrum-LTC. On all other operating systems, it is located in ~/.electrum-ltc.
What is a blockchain? A blockchain is a long record of every single transaction ever made. Each litecoin traded for a good or service is marked on the ledger with a transaction id and the origination and target wallet addresses.
Site produced by Frank Tudor